I recently spent five days in Cartagena.  Cartagena was founded in 1533 and was rebuilt in 1552, folowing an extensive fire.  It quickly grew into the primary Spanish Carribean port and was the storehouse for plundered Peruvian gold awaiting shipment to the Spanish Crown.

Following numerous seiges including one by Sir Francis Drake, Spain began construction of a 13 kilometer wall around the city.  The project took almost two centuries to complete and created an outer city (Getsemani) and an inner city, both with walls and separated by a canal which more recently has been filled in to create a plaza.  In 1984, UNESCO designated the fortress walls, port and most of the old city as a World Heritage Site. 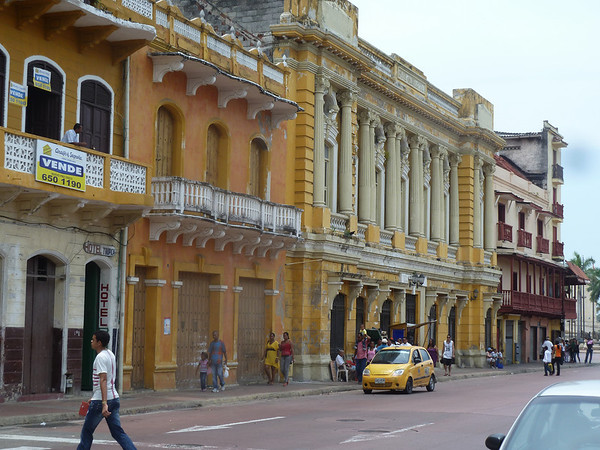 Cheap and Plentiful Taxis Outside the Inner City

Getsemani is poorer than the inner city and is not as well preserved.  After spending eight days on a small sailboat and an 18 hour travel day to Cartegena, I decided to splurge on a really nice hotel room in the Villa Colonial, a beautifully restored hotel. It is just down the street from the above photograph.  From here it is a short walk across a statue-lined plaza and through the clock tower into the walled inner city. Gateway to Inner City of Cartagena

I spent most of my days walking the old city.  When I would get tired of walking, I would stop at one of the many sidewalk cafes and have an expresso or a drink and appreciate the beautiful architecture and people. Over the course of five days and four nights, I shot hundreds of photographs.  What follows are just a few selected shots. Stopping for an Expresso, Cartagena, Colombia At one point on top of the wall (yes you can walk atop much of it) there is an outdoor bar, Cafe del Mar,  which is a perfect place to watch the sunset over the Carribean. Watching the Sun Set with Friends

Two my immediate right are Diederik (Holland) and Alessandro (Italy) buddies from the sailboat trip. Stopping to Buy Some Fresh Fruit

And of course, there are the requisite tourist oriented street performances. By now you can hopefully see the appeal of walking this old city.  It is a feast for the eyes, ears, nose, tastebuds and heart.  For those who choose not to walk, the horse-drawn taxicabs can take you around.  This fellow has already put in a full day! Thanks for joining me on this walking tour of Cartagena.  I hope you enjoyed it and highly recommend a few days to visit here.