It was my last morning in Cartagena.  I had been eyeing this building for days and had determined early-mid morning would be optimal light. The Goal: Office Building Roof Just Outside the Walled City

So I walked over from the hotel and found the requisite shotgun toting guard at the door.  For 10 minutes, I repeatedly tried to explain to him that I wanted to shoot some photographs from the top.  He finally told me to go to the sixth floor to get clearance.  I think that he thought I wanted to film a movie.

Once into the elevator, I punched the top floor.  I walked into an office that seemed like the proper side and asked the rather surprised receptionist if I could shoot some pics.  She smiled indulgently and motioned me toward a door that lead onto a large wraparound building…perfect!  Here are a few of the results. 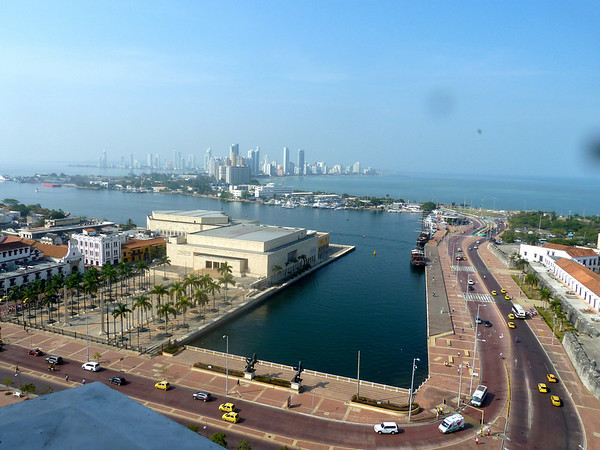 View of Causeway Toward the New City-btw, Never Went There Above the Old City of Cartagena I shot for about 20 minutes and then had to beat a hasty retreat to the hotel, grab my backpack and catch a cab to the airport for the flight to Medellin.

Soaking in a Volcano!
Medellin

6 Responses to Aerial View of Cartagena